It’s better to have something than nothing. This brave step of Sri Lanka has now strengthened the hope of opening the door of international cricket in Pakistan. Remember that, it was a Sri Lankan team who was affected by a terror attack in 2009 after that top international teams refused to play cricket in Pakistan. Since then, Pakistan was bound to opt a neutral venue whenever they were supposed to host any international team. And most of the times PCB opted to play in UAE. So, it was really challenging for the PCB to cover the extra charges and playing conditions for the players as well. As it really brings difference when the team play in their own country and to other places outside their countries. Particularly, it significantly affects the test performances of the teams.

Sri Lanka tour to Pakistan 2019 will include 3 ODIs in National Stadium Karachi on 27, 29 September and 2bd October each. And Gaddafi Stadium Lahore will host 3 T20s on 5, 7, & 9th October each. Pakistani fans and players are so glad for this NEWS as players will represent their homeland in their own country and meanwhile, fans can also afford to see their heroes live playing in respective stadiums.

Eventually, International Cricket has returned to Pakistan with Sri Lanka tour to Pakistan 2019, at the same point from where it was banned. But there is a difference of ‘0’ & ‘1’ in between. It was the last Sri Lankan team who played in 2009, and it’s the same team coming to play again in 2019. However, the whole nation is really happy about this NEWS and wishes that more international teams must come to play in Pakistan. This will also enhance and strengthen good relationships, bring joy in the faces, improve the team’s ranking, and enrich the PCB as well. 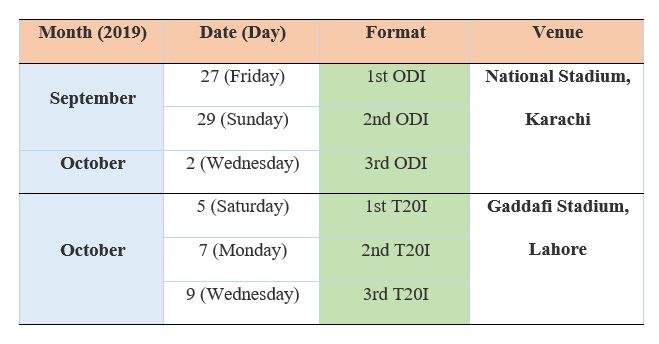