The most decorated player in football, Dani Alves, has moved to Sao Paulo as a free agent after his 2-year contract with PSG expired last month. Sao Paulo confirmed the move via the club’s official Twitter account on Thursday.

With 43 trophies in his cabinet, the legendary Brazilian full-back, Dani Alves, is the most decorated player in world football, as he lead his national team win the Copa America this summer as a Captain, being voted as the Player of the Tournament.

Alves in an Instagram post offered himself to any interested clubs on Wednesday, and is said to have received offers from Manchester City, Inter and Juventus, though Alves himself was keen to make a return move to Barcelona, where he previously helped the Catalans win 23 trophies. 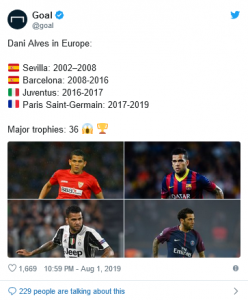 This move meant that Alves will be leaving European Football after a long 17-year run, having joined Sevilla in back in 2002 from Bahia. After an 8-year span with Barca, Alves left Spain to play a season with Italian Giants Juventus for the 16-17 season, winning a domestic double. Alves joined French side Paris Saint-Germain on a free transfer, winning a domestic treble in his first season, followed by another league title the following season in Ligue1.

Read more articles by clicking on the links: