The term comics defined as the medium of literate which includes four consistent elements to help the readers. The first is to understand the text, then representing the characters, then analyzing the dialogues, and last visualizing the literary elements in them. Comics has been divided into two types, the mainstream comics, and the art comics. As for the novel, Encyclopedia of early earth is concerned, it is categorized in the art comic. As the novel is solely written by Isabel Greenberg. a graphic novel presented in a single book, written by a single cartoonist or author named Isabel Greenberg. Thus, Encyclopedia of early earth is categorized in the art comics of the comics types.

Review of the Comic: Encyclopedia of early earth

For me, this graphic novel “encyclopedia of early earth” was remarkable and really worth reading comic book. This novel discussed the history of mankind and the civilizations and influences to claim that how deep and wide it is? There are enormous stories and the myths that have united people into the groups, and this is not happening today, but the people who roamed early on earth has practised. In the novel, the author Isabel has chronically presented the story of the storyteller who paddled from the land of the Nord in North pole of the earth to the south pole just in search of his missing part of the soul. The author has carefully and well sequentially displayed the story of this quest which is full of myths, bravery, gods, and love.

The pictures in the novel, Encyclopedia of early earth, have rare use of the colours. Which means the author wanted to grab the audience focus on to the writings of the novel as well and to make the novel more attractive and pleasant for the readers while undiminishing the text of the novel. Just like Aleix Solo has a couple of books “Simiocracia and Europesadilla”, in these books he has also used any other colour than the grey colour, it was because he wanted audiences to give more focus to the text rather graphics. It is also a great art to understand the nature of the work and to know the needs of the target audiences.

Whereas the similar novels presented in multi-colour graphics are also much attractive, but they keep less focus on the text because of these, the authors come up with a particular mindset that they will try more to tell the story through pictures and the graphics rather than the text. It is also because of the need of the target audiences and the nature of the work. Both of these types keep their own importance and value to their respective target audiences.

The story starts with the Nordion three sister. The Nord, a place in a north pole of the earth covered with ice. The summers in the Nord stay only three months and in that time dwellers of the Nord celebrate together like a civilized nation, all the nearby clans meet and enjoy their life. Three sisters found a child in the river, they brought him in their home. The soul of the kid was divided into three bodies and handed-over to each sister. Later, when the soul spliced in one body, there was something missing in the kid of his soul. To find that missing part he starts his quest towards the south pole of the earth.

Beyond the Aurora, in the cloud castle, the god birdman, his children (Ravens) kid and kiddo watching the storyteller (the hero of the story), and kiddo wanted to help him in his quest as she thinks the storyteller has brilliant stories to entertain the world and a very kind person. But the Birdman thinks different.

The Hero of Encyclopedia of early earth; Storyteller:

As we read and watch the pictures, we found our hero of the story in a range of unwanted troubles just as he starts his quest. Storyteller faced many difficulties in a way. The sea creatures, storms, wildings, strange islands, naked big creature, Cyclops and the naked women, who wanted to end his quest or somehow distract him and can trap him in any way. But the storyteller has a watch of the kiddo and anyways he survived all the barriers and stay focused on the quest. Isabel has beautifully written and illustrated the barriers being faced by the storyteller that reviewers of the book have also emphasized in these quest-barrier events of the novel.

Later, we found that storyteller has been stuck in a storm. Which brought him to an unknown place, where he was caught by the Dags and brought in before the Queen of the Dags as a spy of Hals. They thought that the storyteller is the spy of Hal. But soon as they came to knew the reality, they demanded him to tell a story. Here he goes with telling them the story of his land, The land of Nord. The good summer, harsh weather, the Eagleman, the medicine man, and many more. The stories inspired the people of Dags, and later he also being entertained with the stories of the Dags and their tribe and their beliefs. He came to know that how Dag killed his brother Hal because of Halla, the only girl among them. 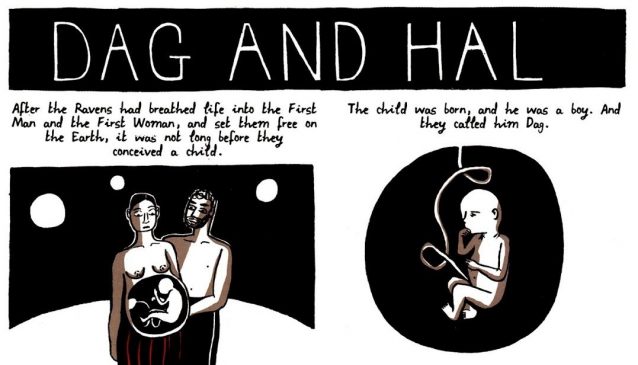 The story of Dags regarding the creation of the earth was much similar but a bit different. They believed in the Birdman and his children. They believe that the man and the first woman have been carved with wood by Birdman, the god, and the Ravens (the children of the birdman, kid and kiddo) breathed life into them.

All clans of Britanitarka are living friendly and allies except Dags and Hals as both of these clans are revivals of each other since Dag killed his brother Hal. It seemed really interesting to know that early earth people were so civilized that they made alliances. Anyways, the storyteller was once again asked to the story based on bloodshed and fighting. Unfortunately, this time he failed because he told them the story in which the people Nord defeated the Dags in their lands. So, they put him in the ditch. But the giant-slaying poisoned-sausage-making old lady rescued him as kiddo asked her to do so.

Ending of Encyclopedia of early earth: 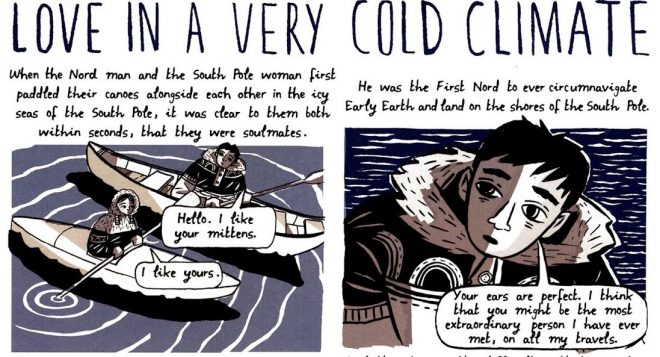 Anyways, he reached Migdal Bavel, become the mapmaker, and fled from there as well with the help of the previous mapmaker of the Migdal Bavel and his three full trained monkeys. Before whale ate the storyteller, the Isabel also mentioned a myth of Noah and Kiddo’s love story, and how she was betrayed. This time the Kid helped storyteller and asked whale to bring the storyteller at the shores of the south pole. Where he met with a girl and get the missing part of his soul. Thereby, the girl and the boy get attraction and fell in love. They married but they were not able to be closer to each other because of some physics laws. All their life, they spent closer in love without touching but when they die, they in their arms.