Former President of Pakistan (2008-13) and de facto leader of Pakistan People’s Party (PPP), Asif Ali Zardari was born on 26th July 1955 in Karachi. He was elected as 11th President of the country. Following the assassination of his wife, all times great, Mohtarma Benazir Bhutto (Daughter of Former Prime Minister of Pakistan, Sir Zulfiqar Ali Bhutto) on 27th December 2007.

Currently, it has been more than a month that people are talking about the health problems of Asif Ali Zardari. Several video messages have been issued by individuals claiming that former president Asif Ali Zardari is no more with us and saying that the News is kept secrete from the public. Moreover, several vloggers also saying that former president is departed to eternity, and it’s kept confidential from the general public because PPP leadership has got greater concerns of the public and they don’t want to allow people to participate in any funeral gatherings and come out in public for any reason.

In response to these general public queries and concerns, Farooq H. Naik (PPP Politician and a lawyer) has claimed on 15th May 2020 during an informer media talk and said:

“The reports about Zardari’s death are baseless. He has several illnesses and has back pain but he is at home because of the coronavirus pandemic.”

Moreover, 0n 26th May 2020, Syeda Shehla Raza, Minister For Women Development Sindh, Ex-Deputy Speaker Provincial Assembly of Sindh, and Ex- Acting Governor Of Sindh posted a picture of former president Asif Ali Zardari on her official Twitter account showing his always smiley face, sitting with full of determination and hope. But, people in the comments section posted the same picture with full-frame and showing it was first published on July 26, 2019. Which does not provides significant evidence of Pakistan’s former president’s current status. 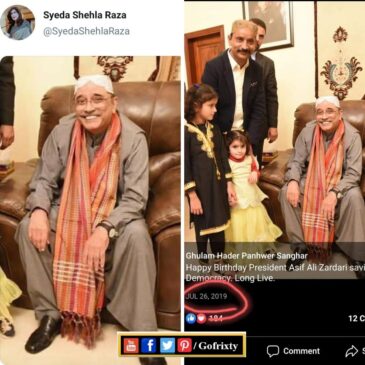 If any of his children with writing a single line on their official twitter or any other verified social account about the current status of Asif Ali Zardari would permanently close the chapter of these rumours. But, the question is, why they are not writing that? Why this news is kept confused? Well, so many questions appear currently when it comes to the former president of Pakistan Mr Zardari.

Please share your feedback in the comment box if you can link this with any reliable and valid source. So, stay updated on Gofrixty. We will keep you updated whenever any official news appears regarding the case.

Read more: How people will observe Eid who stays on moon? Fawad Chaudhry

7 Soldiers have martyred today in two separate attacks in Balochistan