Emotional Intelligence (EI) refers to the process of perceiving, using, understanding and managing the emotions of others, with a person interacts. EI is an essential part of humans’ life. Being a social animal man is all-time in interaction with other people. So in order to make social gathering worthy, it is imperative that one has complete grasp over his emotions.

The terms emotional intelligence in the 18th century, when social scientist started researching on combine behaviours and emotions of people. Since then it has got tremendous importance, as at every sort of gathering whether that is a large level or small level, one needs to manage his/her emotions. It is being more prominent with every passing day, due to the fact that some due to globalization cultures and societies are being more diversified, thus making it ultimate necessary to understand each other social and cultural dynamics.

We all know a person who is most brilliant but doesn’t seem to have good relations with others and not socially popular. A student who always gets high marks in class but is not friend with anyone and he is just a book worm. This shows that going ahead in our lives only intelligence is not enough for success. People with a high level of EI are more successful in daily life they know about their emotions and the emotions of the people around them know how to respond to other people with positive energy and emotion. They can regulate their emotions. These people don’t let their emotions to rule over their lives. IQ is a natural gift by God this can’t be regulated by the practice. But EI can be improved with the training and practice. 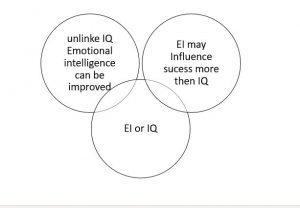 Above figure shows the two important things about the Emotional Intelligence that it may influence the success of a person more than the Intelligence and it can be improved with the practice.

Following is the figure of the Summerville study. The study was done on the 450 boys who grew up in Summerville Massachusetts. Study duration was 40 years, in the end, they came to know that the IQ of the boys had a little relationship on their success in life. 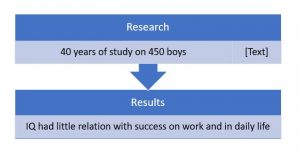 Wherever it is human, there are emotions, and the person is required to get control over his/ her emotions. The scope of our training is broads, as it whenever wherever bases.